Sleep Regression and the Stock Market

You started and ended the year as the largest publicly traded company in the US with your stock beating the S&P 500 Index by 16%. You are producing more and selling more ... at higher prices. You just reported a 57% increase in last year’s earnings and returned $19 billion to shareholders during the year. Investors expect your reign at the top to continue as analysts have seven “buys” and one “sell” on your stock ...

Are you Apple? Amazon? Microsoft?

Humans suffer from recency bias. We take the most recent information and extrapolate it into the future. This bias shows up just about every part of our daily lives. My favorite recent example was when our son, Mac, who had been an amazing sleeper, suddenly “regressed” at about four months. Sleeping through the night was no more. He’d wake up after about one hour and scream for what seemed like an eternity. During one of these episodes, my wife Erin turned to me and said, “This will never end. Will we ever sleep again?!”

She didn’t find it entertaining when I started explaining why recency bias was clouding her vision—my mistake. But, it turns out, I was right (for once). Mac got over his “regression” relatively quickly and he has been enjoying restful nights of sleep ever since.

Nowhere is recency bias more apparent than in the stock market. As investors, we are literally drinking from a fire hose of stock information, tips, infographics, and charts. The most recent information tends to outweigh more measured, long-term perspectives.

“Apple sold how many phones? I gotta buy the stock.”

“Wait, Amazon bought WHOLE FOODS?? Not even grocery stores are safe from its wrath!”

“This virus is scary, it’s literally going to infect everyone in the world.”

I caught myself on the drive home recently pondering an option strategy on Tesla’s stock. It had doubled in a matter of days and CNBC was describing options strategies that literally made certain traders millionaires. I remember thinking, “They are right. There’s no stopping this thing!” Thankfully, I resisted the urge.

Nobody is immune. But we can defend against this bias by looking into history. And that is exactly what I did in our recent Instagram post which I summarized below. 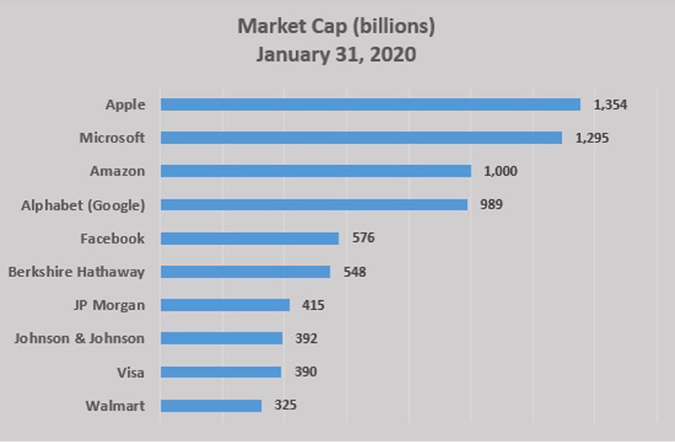 Today, Apple, Microsoft and Alphabet (Google) are each worth more than $1 trillion. Many investors expect they will continue to dominate the market. But history tells us otherwise. 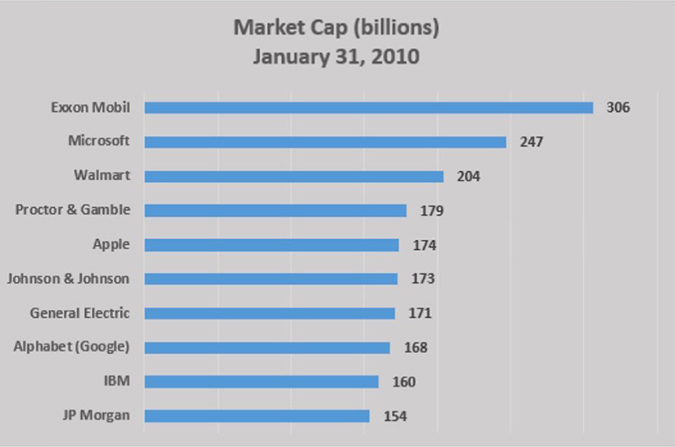 Exxon Mobil was the top S&P 500 stock in early 2010 as oil traded around $80 per barrel and Goldman Sachs predicted crude was headed to $200. Oil now trades around $50 and Exxon stock is worth less today than ten years ago. 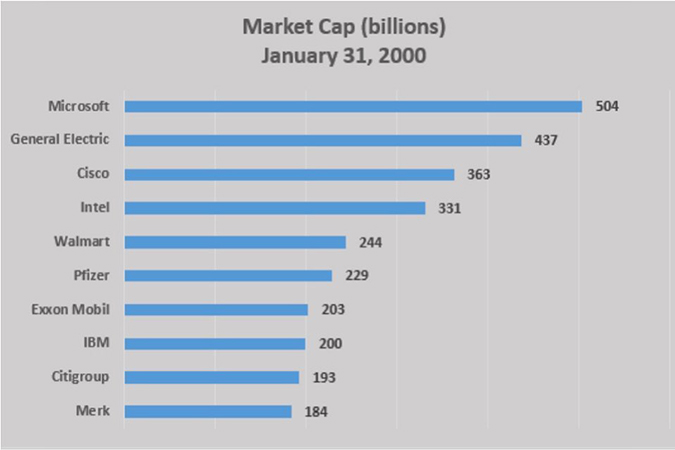 Microsoft claimed the top spot. Far more interesting is General Electric at #2. GE stock is down 70% over the last twenty years. 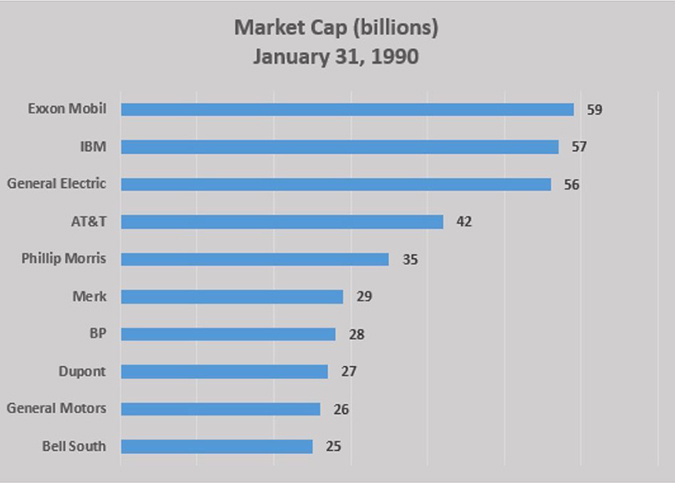 The largest public company in the US was Exxon Mobil (again) at $59 billion. Today’s largest company (Apple) is 23 times larger than Exxon was in 1990.

So when you hear pundits tell you Amazon’s reign will last for generations or you find yourself wanting to buy Apple stock ONLY because it was up 80% in 2019 and is the largest public company in the US, think about GM in 1990, GE in 2000, and Exxon ten years ago. Nothing lasts forever, including sleep regressions.

CastleKeep and its clients may own stocks referenced in this post from time to time. This does not serve as a recommendation to buy or sell any stock. Consult with your advisor about specific investments.