Many investors are comparing the recent dominance of tech stocks to the Tech Bubble of the late 1990s. I have been in the industry since 2004 and therefore did not experience the Dot-Com mania in a professional capacity (I did lose money in search engine Lycos when I was 18).

I imagine the last several months of 2020 feeling similar to the 1999 run up. FOMO for those missing out on gains of Tesla, Amazon, Zoom, etc. is palpable. I can understand why some may think, “I realize the stocks are extremely expensive but if they just keep going up, why not just capitulate and go all in? After all, some of these tech names do have solid underlying businesses generating cash flow (Facebook, Alphabet, Apple, Microsoft).”

But shouldn’t price matter? Turns out that in 2000, it eventually did.

We can all agree that Microsoft is a phenomenal business—it has been for decades. So, I wanted to see how the business performed relative to the stock price and valuation from 2000 to 2010 (post Tech Bubble). Did price matter then?

I kept it simple and looked at the company’s revenue growth to evaluate the business and used the stock price and Price to Earnings Ratio (P/E) to evaluate the stock. Those metrics are below.

Not only did Microsoft nearly triple its revenues to $58.7 billion in 2009, but it initiated a dividend starting in 2003, demonstrating that it was a stable, shareholder-friendly business.  You’d think the stock would have performed well, right? Wrong. Despite a decade of business growth, by 2010, shares of Microsoft had dropped by roughly -40% (at one point MSFT was down -70%) from where it began the 2000s.

Suppose by the end of 2009, you grew frustrated that despite the company’s strong fundamentals, the market didn’t care. With the stock trading around $30 and a relatively cheap P/E of 15.82, you sold. Understandable, but was it a mistake? Let’s look at the same data from end of 2009 to end of 2019.

Revenue more than doubled to $126 billion in the ten years ending 2019. While substantial, the growth wasn’t as impressive as the previous decade, so did the stock trade down again? Quite the opposite. It grew by 5 times!

Below is the Microsoft price chart for the ten years ending 2019: 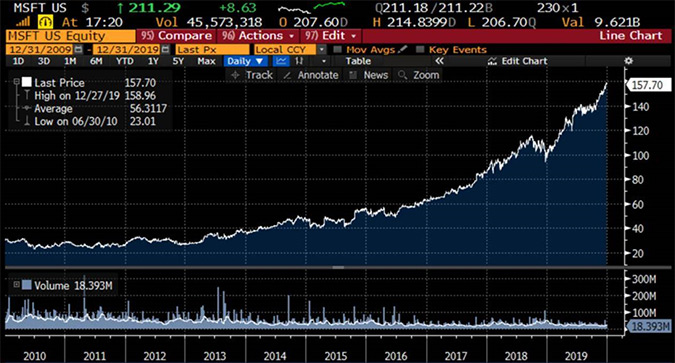 Microsoft has been a terrific business through both decades. But the experience of an investor was dramatically different based on when and how much they paid for the stock. It was too expensive in 2000 and too cheap by 2010. It turns out that price does matter.

So if you find yourself buying stocks because your friends have made money in them or you want to sell a good business which stock has languished, recall Microsoft’s two-faced, two-decade run. Over time and in theory, stock prices should reflect the earnings potential of the underlying business. But in the short-run, and on the CNBC ticker, investor irrationality may win out. Prices get too high. Prices get too low.

How do you take advantage of others’ irrationality? Be mindful of your own.

Disclaimer: CastleKeep, its employees and clients may own shares of Microsoft from time to time. The above is for illustrative purposes only and is not a recommendation to buy or sell the stock.  Consult with your advisor for specific investment advice.

The S&P 500 Index is Underperforming Itself