Bitcoin, FOMO, and the Greater Fool

I’ve capitulated. I have received enough inquiries, texts, and inbound calls from friends and clients alike, asking “should I buy Bitcoin?” that it’s time to put my thoughts on paper.

Let’s start there. From what I understand, Blockchain is the technology platform on which crypto currencies are built. The Harvard Business Review describes it as, “an open, distributed ledger that can record transactions between two parties efficiently and in a verifiable and permanent way.” If you’d like to nerd out more on Blockchain, read this and this. Companies like JP Morgan, Goldman Sachs, and IBM have all created dedicated teams to focus on this initiative. The technology will likely create huge value by providing real time transparency and efficiency to transactions. In short, Blockchain is real.

But is Bitcoin real? Depends on your definition of real. You can’t touch it, you can’t feel it, you can’t see it, but you certainly can double, triple, quadruple, or “ten bag” your money with it. Look at the one-year chart of Bitcoin: 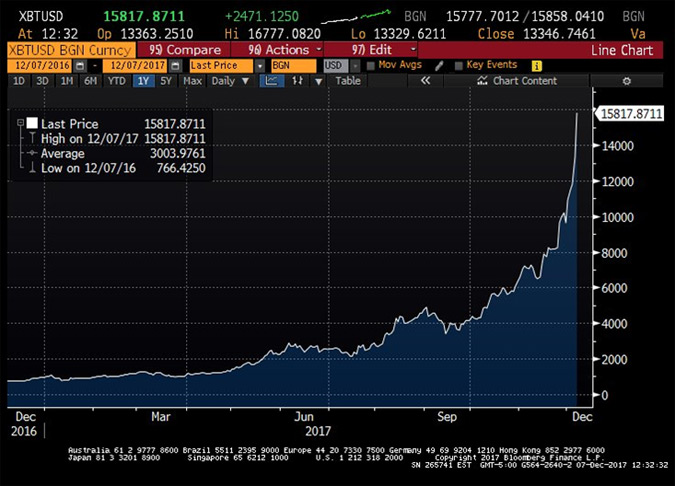 So should you buy Bitcoin? I’m not sure. I think you probably shouldn’t. But I would have said that (and have been) for 10,000 points now. Today, I look like a fool, but for how long?

What is it worth?

Normally when we speak to clients or friends about investments, we try to frame the discussion around valuations. Whether it’s a piece of real estate, a business, a stock, or bond, we can turn to many metrics (P/E Ratios, Book Value, Replacement Value) to determine what we believe to be a reasonable valuation. But Bitcoin doesn’t have a physical underlying asset (like farmland), doesn’t generate a future earnings stream (like a business), doesn’t pay dividends (like many stocks), and doesn’t kick out interest to you (like a bond). And unlike gold, silver, copper, or lithium, as far as I can tell there is no commercial application for actual Bitcoins. So how do you value it?

I’ve heard people try to apply a valuation to Bitcoin comparing it to gold, which for many is a store of value (love those gold coin commercials late at night!). These folks try to ascribe a value by saying, “We estimate that investors will replace their gold coins/bars/ETFs for Bitcoin as a store of value over time. The global value of gold is $xxxxxxxxx and if we assume 10% of this market moves to Bitcoin, then you can see Bitcoin trade as high as $xxxxxx.” Other folks try to value it as a share of GDP or a share of hard global currencies.

These attempts to justify a valuation on Bitcoin are all nonsense. The only thing that matters right now is supply and demand. You see, Bitcoin was created with a finite amount of “coins” and the founder (an anonymous person named Satoshi Nakamoto) has promised to never increase this number. So if the supply stays constant, and the demand increases, then the price will go up—indefinitely, if there is enough demand. That’s what we are seeing now: huge demand. The Coinbase app (which offers an interface to purchase Bitcoin) is now the number one app on the iPhone ...

For those who did not major in economics, let’s say there was only one Leonardo DaVinci painting remaining in private hands. Could we all agree that artwork from one of the greatest artists of all time would probably be something people would be willing to pay a lot of money for? Suppose that painting went to auction. How much would it fetch? Oh wait, that happened this year and it sold for $450 million.

As if fixed supply and super high demand wasn’t enough, I also believe there are many behavioral economic theories playing into the meteoric rise in Bitcoin. None more present than the “Greater Fool” theory which states that the price of an object is determined not by its intrinsic value, but rather by irrational beliefs and expectations of market participants. In other words, I know that buying Bitcoin at these prices is foolish, but I’ll just sell it to a bigger fool at a higher price later!  Most bubbles are fueled by these ever greater and greater fools. So if you have fixed supply, tons of demand, and a bunch of foolish participants, prices can get a bit whacky, if not manic.

And mania is how I’d describe what is going on with Bitcoin today. Take a look at this post from a widely followed financial blogger, ZeroHedge: 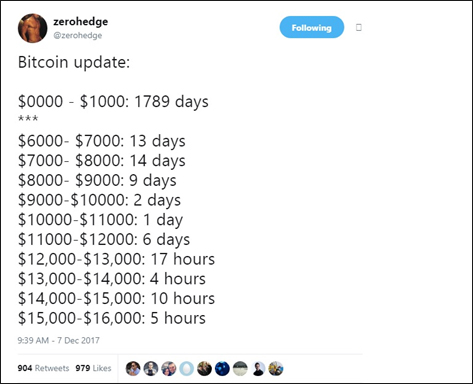 Is it a bubble? Probably. Will it burst? Don’t know. I think it will but have no idea when. This speculation is reaching a frantic level and it reminds me of the two bubbles I have lived through in my adult life: the tech bubble and the real estate bubble. Quick anecdotes on each of them.

We all remember the tech bubble. In the late nineties, virtually every company that went public with a “dotcom” in their name doubled then tripled again. Bill Gates, on the back of his ownership in Microsoft, became the wealthiest man in the world with a net worth above $100 billion. But then the music stopped. Bill Gates survived, but many folks having taken out second mortgages on their homes to invest in phone.com or diapers.com were left bankrupt. Many never recovered.

I too fell into the trap. During my senior year in high school, I invested some money in shares of Lycos, one of the early search engines (at one point had more users than Yahoo and Google). My money doubled within months just as I went off to college. I came home for winter break and asked my father how my account was doing. I logged in to my e-trade account and freaked. “Where are my shares? Where did my money go? What is Terra Networks??!!” My shares of Lycos had tanked and while I was playing beer pong at fraternity houses (and going to class of course), they were eventually acquired by a Spanish tech conglomerate named Terra Networks. I lost virtually everything. Lesson learned. Pay reasonable valuations. Know what you own. And follow it!

The next bubble I lived through was the Real Estate Bubble, which resulted in the financial crisis. Again, I don’t need to take you through the events, but I’d like to share a worthwhile anecdote. I was a broker at Ameriprise Financial. One of my jobs was to cold-call potential clients and convince them to invest with me ... in stocks, bonds, and mutual funds. Most of the time, I was after IRA money. My good friend at the firm made an outbound call to a construction worker to tell him the benefits of using an IRA to fund his retirement goal. The man abruptly interrupted to brag about his home flipping business. Why on earth would he invest in an IRA?!  As he so eloquently put it, “I can’t put a house in my Roth IRA!!”  We all know how that ended.

Over the last several weeks, I have fielded many inquiries about Bitcoin. “What is Bitcoin?” “Should I invest?” “How do I invest?” “Am I too late?” I have multiple conversations with the smartest of my friends who are all trying to figure this out. It’s starting to reach a fever pitch (more on this below).

And it’s understandable. Bitcoin is everywhere. Facebook, Instagram, Twitter, CNBC, Bloomberg, USA Today, and CNN. Even Venezuela is getting into the crypto currency action by issuing their own version.

What’s not to love about a new technology that has minted “Bitcoin Billionaires”? Have you seen the news about the famed Winklevoss twins? You know, the strapping lads who sued Mark Zuckerberg claiming he stole their idea for Facebook? Well, their Bitcoin stake is now reportedly worth billions. Why wouldn’t you want to get in on the action?

We all have stories about the mania. There’s the guy who took out a HELOC and put it all into Bitcoin (sound familiar). The other guy who is mining coins in his mother’s basement because she gets a better rate on electricity than he does (really??)  And the chap in Britain who years ago accidently threw away his hard drive with a bunch of bitcoins on it that are now worth over $100 million! He’s offered to share profits if a task force can help him find it in the local landfill. Crypto treasure hunting!

I have one too. It’s about my friend, a graduate of a prestigious university. She holds an MBA, a CFA, and is a CPA. In mid 2016, she sold all of the equity exposure in her 401k because she was worried about the valuation of the U.S. stock market. She’s 35 years old so this is money she can’t touch for 25 years—plenty of time to recover should the stock market sell off. So far, it has been the wrong trade. She’s been in cash while the S&P 500 Index has gone up by roughly 30%. The stock market is too risky, but crypto currencies?? Must be safer than the stock market, right?

Her question to our “Ethereum” group at 6:00 am this morning was: “I want to put a bid in for one coin at $5k but at this point I would be catching a falling knife if it retreats that far. Crazy, but it will probably hit $25k by February. Have no clue how to analyze any of this.”

Eighteen months and over 7000 Dow Jones points ago, the US stock market was too risky for her. Today, she is trying to day-trade Ethereum. Mania?

So Should I Invest in Bitcoin?

A recent e-mail came in from a friend (also a client). It was the second inquiry I received regarding Bitcoin that day. It read, “What’s the deal with Bitcoin? Is it worth investing in it?”

I put together a response, the themes of which were:

I am doubtful this will replace cash for large purchases. Imagine if you were saving Bitcoin for a down payment on a home purchase only to find it drop by 29% over the weekend (of course it since has recovered).

I ended the email by writing, “In the end, if you wanted to buy some Bitcoin, I’d look at it like a weekend in Vegas. Only buy as much as you can afford to lose and not freak out about it.”

I think that is a reasonable recommendation. If you are dying to get a piece of the action and are suffering from major FOMO (Fear Of Missing Out), it wouldn’t be crazy to buy some with a small percentage of your net worth. Had you “invested” in Bitcoin 20 days ago, you’d have more than doubled your money by now! But, like your chip stash at the Bellagio while playing blackjack, it could all be gone tomorrow, too.

Before you open your first Bitcoin account and drop a couple grand on some coins, first consider another tried, true and legal way to double your money overnight: fund your company 401k up to the company match. It’s free money!

If you have questions or would like more information, please contact Steve: .(JavaScript must be enabled to view this email address).

The S&P 500 Index is Underperforming Itself