This year’s Berkshire Hathaway’s Annual Shareholder Meeting ended and I wrote down the following to summarize the day:

Read a ton. Never stop learning. Be patient. Surround yourself with great people. Do what you think is right. And do it all over again.

The message is the same as it ever was.

To me, that’s the beauty of making the trek to Omaha. Markets change. Politics change. But each year, Warren Buffett and Vice Chairman Charlie Munger stay on message and remind us to tune out the considerable static, do our homework, and act with conviction when the odds are in our favor.

And while their message has not wavered, this year’s meeting featured one major change. Whether by design or not, recently named Vice Chairmen Greg Abel and Ajit Jain were each handed the microphone twice to answer questions from shareholders. Normally, Buffett and Munger are the only ones addressing the 40,000 people in attendance. This was a first, and highlighted that Buffett and Munger are eager to roll out a smooth succession plan. After all, they are 88 and 95 respectively. Their track-record may be god-like, but last I checked they are not immortal. 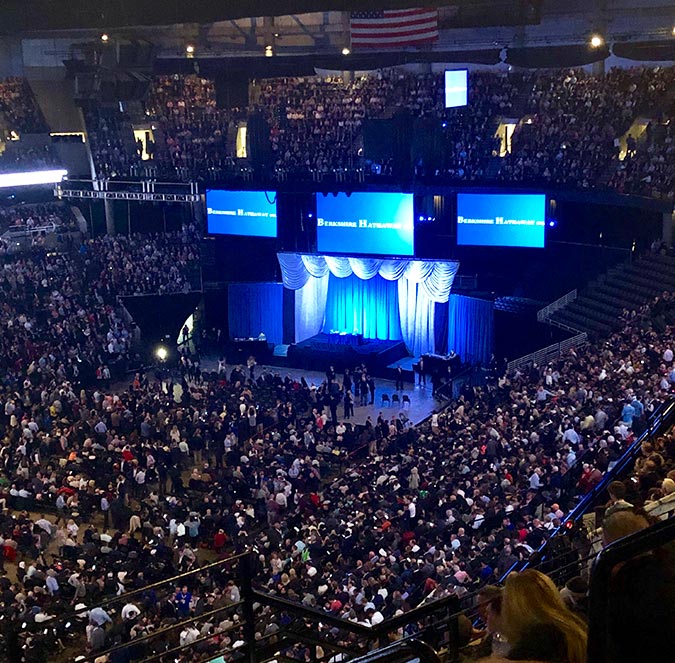 Attendance at the 2019 meeting was one for the record books.

Other Notes from the Meeting

“We will buy stock when we believe it is selling at a conservative value below its intrinsic value ... it’s very simple. We are ok buying it but we aren’t salivating over it.”  Buffett

“If a bank needs government assistance, the CEO and their spouse should lose their net worth.” Buffett

“I’m a card carrying capitalist. You don’t have to worry about me changing in that way.”  Buffett

“You can pay too much for a business. The business does not know what you are paying for it.”  Buffett

“I don’t beat myself over not buying Amazon. He’s a bit of a miracle worker and it’s peculiar. But I feel like a horse’s ass for not buying Google.” Munger

“It’s awkward being different but I don’t want to be like everyone else ‘cause we just do it better. So you’re just going to have to endure us.” Munger

“Don’t take people that have expectations of you that you can’t meet ... make sure you are in sync with each other.” Buffett on managing other people’s money.

“In my family the last thing they’d give up is their Apple phone.” Munger

What do you value most in life today? Munger: “I’d like a little more it.” Buffett: “Time and Love.”

On investing in technology, “We don’t want to play in a game we don’t understand ... we have missed a lot in the past and we will miss a lot in the future.”  Buffett

Munger on specialization: “Nobody wants to go to a doctor that’s half proctologist half dentist.”

On whether Berkshire can expect to continue to compound value like they have in the past, Munger says “Well we came a very long way from small beginnings so the fact that we may slow a little doesn’t strike me as a tragedy ... we are going to do very well over time.” Munger

“It’s very disappointing. We have no formulas at Berkshire.” Buffett

On business and life partners, “The secret is to find the best person who will have you.” Munger

“Think about how much we’ve learned over the years. At any given time what we already knew wasn’t enough to take us to the next level.” Munger

I personally own shares of Berkshire as do many of our clients.

If you’d like to discuss the weekend further, I can be reached at .(JavaScript must be enabled to view this email address)