I moved to Brazil when I was four. Two years later, I was a millionaire. And my money was worthless.

You’d think being a millionaire meant life was good but at one point my family ran out of toilet paper and we had no milk for cereal.

“Mom, why can’t I have milk with my Rice Krispies?” To this day, my loving mother admits telling me that there was no milk for breakfast was one of her most depressing mornings.

All of this was because of inflation.

My father (and partner) attended a seminar recently for the Connecticut Chapter of the CFA Institute. It was a gathering of accomplished CFA charter holders and those working towards the credential. My father estimates the average age of the attendees was late twenties or early thirties. The topic? Inflation. The moderator asked for a show of hands for those who had experienced double-digit inflation. My father’s hand was one of the few that went up. But he is special. He lived through TRIPLE-DIGIT inflation. And you have no idea what that’s like.

My father was transferred to São Paulo, Brazil in April of 1986 and took my mom and us four kids (all under the age of six) with him. São Paulo, a city of some 17 million, is the financial hub of Latin America. At the time, he was working for Chase Manhattan Bank (now JP Morgan) and was asked to establish and run the Commodity Financing unit, in charge of the bank’s lending to and advising coffee, grain, and metal traders and processors. A promised two-year stint ended up lasting five.

During this time, Brazil experienced six economic plans and three Presidents. In addition it faced:

It was a crazy time. And my father tells me it taught him more than any college degree, MBA, or CFA designation could ever teach him. Namely, that inflation is the most destructive force in all of finance.

At its peak, inflation was running at 3% a day. Let me say that again; 3% a day. That meant that a 100 bill on Friday was worth 90 on Monday. It was worth a fraction within a month. Holding onto that bill was the worst thing you could do. So what would you do? Spend it as soon as you received it or try to find ways that you could earn more than the increasing inflation. When everyone is spending money, what is the result? Ever higher prices—aka inflation. It got so bad that using stickers to price goods in the grocery store no longer was feasible. Prices were announced over the loudspeaker and moved higher throughout the day. It’s a vivid memory of mine.

What was the cause of this inflation? It was known as “Plano Cruzado” where the government increased every citizen’s salary by 30% overnight and froze the prices of all goods at the same time. Everyone was 30% richer overnight. So they bought everything. Literally, everything was bought. At the same time, because of the higher wages, factories were unable to produce goods at a profit and therefore slowed down or stopped producing altogether. And, of course, there were import restrictions, so essential goods couldn’t come in from abroad.

This led to a shortage of essential items. First it was toilet paper, then it was Kleenex, then paper towels, and eventually ... newspapers. Yep, we used newspaper to clean our bums. But I was a millionaire.

We learned quickly that economic policies impact social life too (not to mention hygiene). Invites weren’t sent out to people you like; they were sent out to people who had tonic because you had gin. “We literally would call up people in the American Society and say, ‘I’ve got gin, do you have tonic? Know anyone who has cheese or crackers’” my mother recalled.

It was completely out of control. But you had to adapt.

During the hyperinflation, running your personal finances was nearly a full time job. My father remembers a statistic from that era that estimated folks spent two-thirds of their day balancing their paycheck. Imagine running a business? Or worse, lending to commodity producers and grain traders in a third-world country?

My father recalls, “What it meant was you didn’t lend money more than thirty days out—after all, at 80% inflation per month generated more inflation than most thirty-year periods in the US. I couldn’t see out that far. The joke was you’d wake up and read the Gazeta Mercantil (Brazil’s then version of the Wall Street Journal) each morning to find out who was still alive. It was crazy.”

During this time, McDonald’s lost money on every single burger it sold. But business had never been better for them. Why? McDonalds Brazil had negotiated 30-90 day payment terms with suppliers. So a franchise owner bought the lettuce, bread, and meat for say 100 wampum today. But they didn’t have to send that 100 wampum to the supplier for 90 days. Remember that my 100 was worth 90 over the weekend? In three months, it was worth less than 1! Tupac Shakur famously said, “I’m tryin’ to make a dollar out of 15 cents.” The Brazilian Ronald McDonald made 100 out of 1!

Suitcase of Bills to Pay Your Taxi

I was a millionaire, not because I was a shrewd business kid (although I did sell American candy in my Brazilian school—with no tariffs!) or because I made a killing in the BOVESPA (Brazilian Stock market). I was a millionaire because the treasury kept adding zeros to new bills; and I’d just hoard them. Imagine holding a 500,000 Bill? Those existed in Brazil:

The trouble is that within weeks they were basically worthless. Didn’t matter to my US friends. 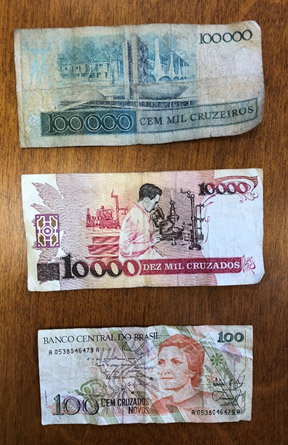 I’m still hoarding them and reaping the benefits. I was the coolest uncle when I showed them to my nephew, Charlie, the other day.

Eventually, there were too many zeros on these bills. Imagine handing over a 100,000 bill for a pack of gum? Or worse? Consider this from my father:

“At one point I invited my American colleagues down to Brazil for a conference. I urged them not to exchange US dollars in New York before their flight. Reason being the exchange centers in NY had old, and therefore smaller, denominated bills. They’d be holding something with a ‘10’ on it while the new bill had ‘100,000’ on it. Sure enough, one of my colleagues didn’t listen to me and ended up with an entire briefcase filled with Brazilian currency. He told me that he never felt so rich when boarding the flight.

“Then reality hit. When he landed and took a $35 equivalent cab to the hotel, he paid the cabby, unloading virtually the entire briefcase. He told me he never felt so poor! Had he waited until landing, that briefcase of money could have fit in his wallet!”

A briefcase of bills isn’t practical. But neither is asking for change when using a 100,000 bill for a pack of gum. So when a new currency was announced, they’d just chop off three zeros and rename the currency. One time, in fact they called it “new” or “novos” in Portuguese. As you see above, the currency went from “Cruzados” to “Cruzados Novos.”

So after five Economic Plans, three currencies, and a whole bunch of gin shortages, the (eventually impeached) president, Fernando Collor, enacted what was known as the “Silver Bullet” to stop inflation. One morning, you woke up to read the paper and found out that all but $1,000 equivalent of your money was confiscated by the government. Even worse, they didn’t tell you when you’d get it back! As I wrote above, corporations weren’t exempt. They too were only allowed to hold the Brazilian equivalent of $1,000.

“At an American Society party event that night, I had to try to give a synopsis of the Silver Bullet to the assembled executives, including the CEOs and CFOs of the local subsidiaries of major US companies, such as Cargill, GM, and the like. Eventually, all begged the local banks to lend them money so they could make payroll. They couldn’t bring in the funds from their parent companies because no one knew what the exchange rate was. Like all bank executives, I told them I would love to help, but there was one problem:  the edict stated that any banker who broke this law would be sent to prison.

“The economy stopped. And I mean, stopped. You didn’t know what anything was worth. Taxi drivers wouldn’t even accept US Dollars for taxi rides because there was no exchange rate. Everything just stopped.

“Eventually, things got back to normal. Things always do. Having lived through that gave me comfort during the 2008 financial crisis. If Brazil could recover from the Silver Bullet crisis in the late 1980s, I knew the US would be just fine. But man, it’s scary when you are in the middle of it.”

The above is a chart of the Core CPI in the US since the Financial Crisis in 2008-9. We’ve hovered at or around 2% for ten years. And while there is no expectation of hyperinflation in the near term at home, we do fear there is an entire generation of investors who have never experienced inflation above 2%, much less in the double digits. Inflation is destructive. The current generation just has no idea.

The folks closer to my father’s age will recall the late 70s and early 80s where inflation was in the teens and mortgage rates were in the high teens. So it’s not like the US is completely immune to high inflation. But anyone born in the 1980s and who hasn’t lived in a developing country has no real-life experience with meaningful inflation.

So, what’s the takeaway here? When you read articles about the US Federal Reserve’s obsession with maintaining their 2% inflation target, picture me as a tan (and plump) six-year-old holding a worthless million. It may not happen overnight or over several weeks, but inflation is real and may be the single most destructive force to impact your quality of life during retirement. Even under current paltry inflation in the US, one million dollars today maybe be worth a fraction of that amount thirty years from now.

When making long-term investment plans, inflation’s impact should be on your radar. And if inflation accelerates, you will want to work with a professional who has real-world experience with its effects.

You don’t want to end up having water with your cereal. Trust me.